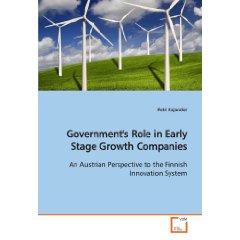 My latest book is now available.

Professor Risto Harisalo (Department of Managerial Studies – University of Tampere, Finland) has written the following about the book:

“The current financial downturn emphasizes at least two important questions. The first is how to create favorable conditions in which new companies with great growth potential can emerge and develop. The second is how to sensibly analyze this process on which the future of society is so dependent.

The book of Petri Kajander grapples both of these theoretically and practically complex questions. He elaborates main features of how small companies are being originated and developed in market process. Then he goes on to evaluate to what extent this process is being supported by financial institutions in which, he shows, are some serious imperfections.

His analysis is well written and justified in the Austrian tradition which is gaining ground from traditional economic analysis which proved incompetent to predict the financial crisis and provide ideas and means to get out of it. He shows that there is continuous demand for spontaneous process of mutual discovery but it is not matched by financial support systems which are mainly public. He locates his analysis into the specific aspect of all areas of human behavior, the human choosing, in universal science, praxeology.

The author writes clearly and understandable. He provocatively challenges orthodox economic thinking. His book is worth reading even if a reader disagrees with his arguments.”