To the moon and back in Crypto, AR&VR, and for real in space 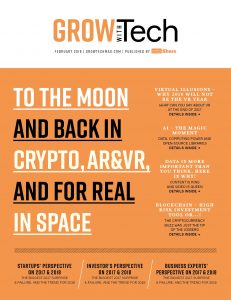 Being prepared does not make you less surprised nor stop the second-guessing. This is the feeling of cryptocurrency mania in 2017.

Fluctuating prices are nothing new for long time Bitcoin followers but to follow closely how a fringe technology catches larger audiences and traction is always an experience. In 2017, this happened in multiple fronts.

The ICO rush has similarities with dot com era behaviour. Slap a dot com on top of anything and you’re good to go for higher valuations. Now, token is the miracle term that makes everything magical.

Yet, technology is a neutral enabler and it seldom makes a business case itself. Crypto technologies are a revolution and disruption but like in the Internet era they need to be developed from the foundations upwards. We are still at the early 90’s of Internet in Crypto.

This time the disruptive forces are already knocking on doors of traditional centralised institutions and industries such as banking, finance and government services where a trusted central party has been a crucial component for service provisioning.

Decentralisation of trust and direct peer-to-peer services will start to democratise highly protected and often profitable sectors. Expect a backlash and protective measures that are trying to linger in the status quo.

Raising concerns of ICO oversight and regulation are just the beginning. 2017 was an example of fast movers taking advantage of seemingly non-regulated space. The window was open only a few months before a tide of copycats and sheer scammers started to overflow the market.

Who trusted online shopping in the 90’s? Not many, but the shock will wear out soon and we will start to see the new amazons, paypals and the like. When you focus on the capabilities and the overall potential it is hard not to get excited. Yet, building something robust, user-friendly and catchy for a wider audience takes patience and many trials on the way.

2017 was also a year of deflating hype. AI bots and voice interfaces were expected to become mainstream in consumer services and products. Alexa was the clear winner that has been becoming more ubiquitous. Still most of the intelligent service bots are still very specialised and narrow in focus.

A slight disappointment was also how Apple treated Augmented Reality in its 10th anniversary iPhone release. The big news was that Google and Apple have their respective AR kits available for larger mass adoption now. In the next years, we will start to see a rapid deployment of these technologies in everyday applications and use cases. Pokemon Go was a good pilot case that was ahead of the curve.

The writing is on the wall for 2018. From a regulatory perspective Revised Payment Service Directive (PSD2) will finally open up banking to third party services. Banks have been preparing for the change but now is the time for prime time.

New apps will start to compete for consumers’ attention with their agile and user friendly pricing models. Incumbents will try to stay relevant and avoid the role of having large overheads and regulatory burdens without much appeal from the users. A utility provider label is not a compliment.

Another EU imposed change is General Data Protection Regulation (GDPR) that will put a serious focus on data privacy. Most of all, this will have implications how user data needs to be approached and handled in a holistic perspective.

This alone is a major shift in perception but when it is combined with the crypto revolution things will shift to a higher gear. We start to see applications and solutions where all user-generated data is controlled by the end user herself. Software is separated from the content and user is in the total access control.

Decentralisation of Internet away from current godzilla silos such as Facebook and Google will spring new innovations and approaches to privacy. Consumer awareness towards their private data will escalate in steps but not necessarily in sync with new alternative solutions.

Large data breaches such as Equifax underline the fact that no single centralised party, private or public, can be trusted with your crucial data. Misuse or data breach are unavoidable eventually. You’re vulnerable if you don’t have control over your data that has consequences on your wellbeing.

Smart homes, IoT, listening devices such as your phone, alexas and security cameras are just the beginning. When your service provider has oversight of everything you consume in AR or VR environment we are stepping into a new level of data privacy.

Space is the new Internet stated Jezz Bezos. Commercialisation of the low orbit starts to catch the awareness of wider masses. The elite status of space is coming down fast with more frequent and affordable logistics that SpaceX, Blue Origin and others are commercialising.

Most of the new space activity has direct impact on our lives here on Earth. New applications, solutions and opportunities are opening up with cheaper start up costs. Spacepreneurs will enter the startup lexicon soon.

This article was written for the Winter ’18 issue of GrowWithTech.